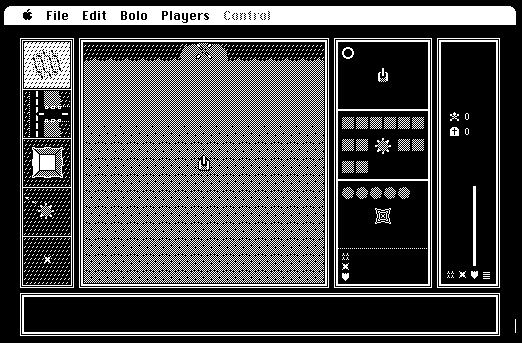 This emulated item contains the game Bolo and around 4000 custom maps. :)

Bolo is a 16 player graphical networked real-time multi-player tank battle game. It has elements of arcade-style shoot-em-up action, but for the serious players who play 12 hour games with 16 players working in teams in different networked computer clusters around an office or university campus, it becomes more of a strategy game. You have to play it to understand.
— Stuart Cheshire

The latest version, 0.99.7bv, can be found at the current Bolo homepage under the "Archives" link.

There apparently once was a map archive FTP site that contained around 3,000 maps, but all traces of it seem to have disappeared. If anyone knows about a mirror, or has the maps, please post here.

Bolo is a video game created for the BBC Micro computer by Stuart Cheshire in 1987, and later ported to the Macintosh in its most popular incarnation. It is a networked multiplayer game that simulates a tank battlefield. It was one of the earliest simultaneous multiplayer networked games.

A similarly named tank game was created for the Apple II in 1982. Cheshire says this was "an unfortunate coincidence",[1] and that his Indian wife inspired the name. As Cheshire noted in his original documentation for the game, "Bolo is the Hindi word for communication. Bolo is about computers communicating on the network, and more important about humans communicating with each other, as they argue, negotiate, form alliances, agree strategies, etc."[2] 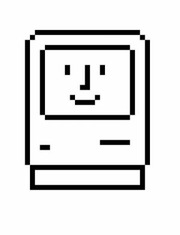